One day in Kara Tepe

Visual report from a refugee camp 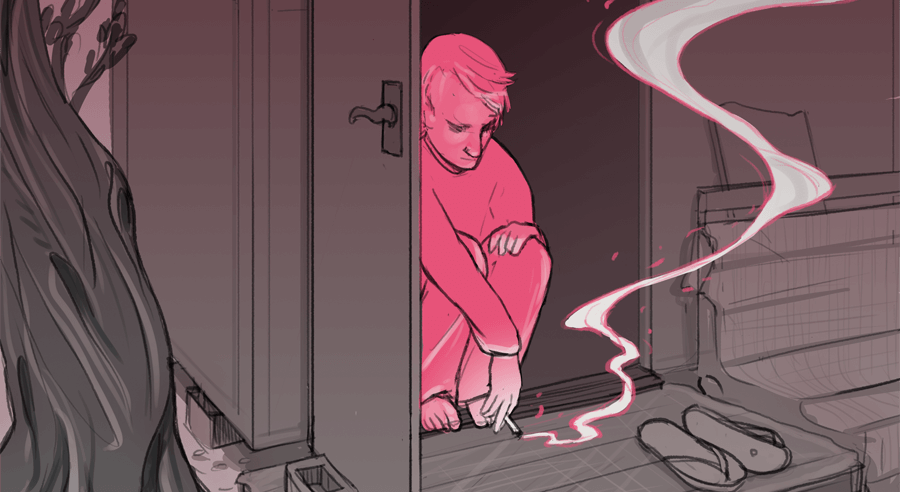 In October 2017 I traveled to the Greek island Lesbos to create a visual report from the refugee camp "Kara Tepe". Refugees continue to arrive there daily on dangerous, illegal crossings from Turkey, in hopes of reaching the European mainland and start a new life. In reality they find themselves stuck between an urgent shortage of facilities on Lesbos and an endlessly bureaucratic procedure that can easily take years.

Journalistic photographers cannot enter inside the camps, but illustrators can. That's why, together with fellow comic artists Aimée de Jongh (who initiated the project) and Judith Vanistendael, we set out to draw the stories from inside the camp that could otherwise not be shown to the world. 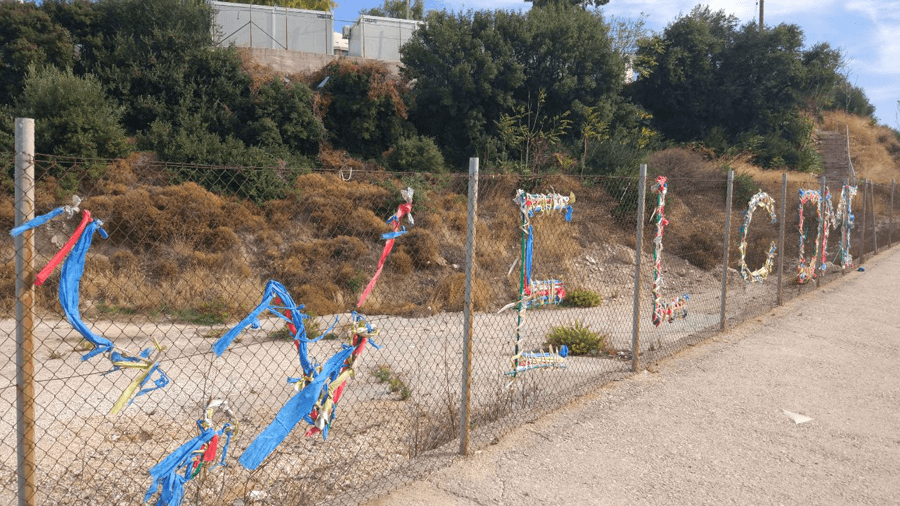 Based on interviews and observations, my report “One day in Kara Tepe” tells the story of a young Syrian refugee and her resolve to find a better life in Europe. It was published by the graphic journalism platform Drawing The Times and the newspaper NRC in a special item, which included a short interview about the project. 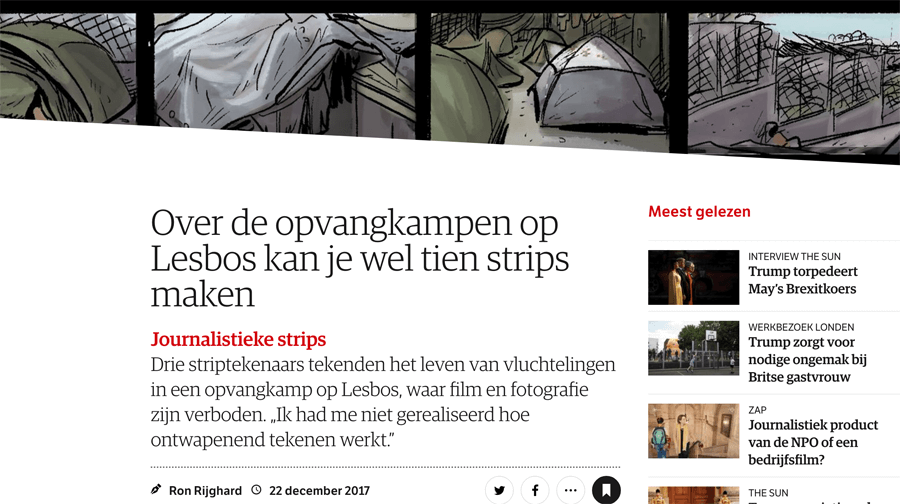 Online publication with interview on NRC.nl/lesbos. 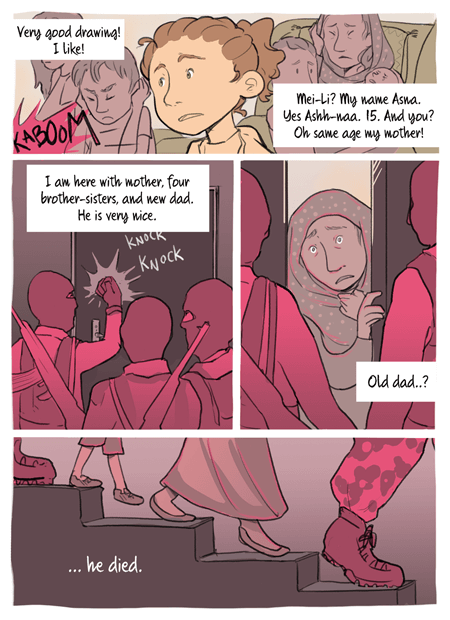 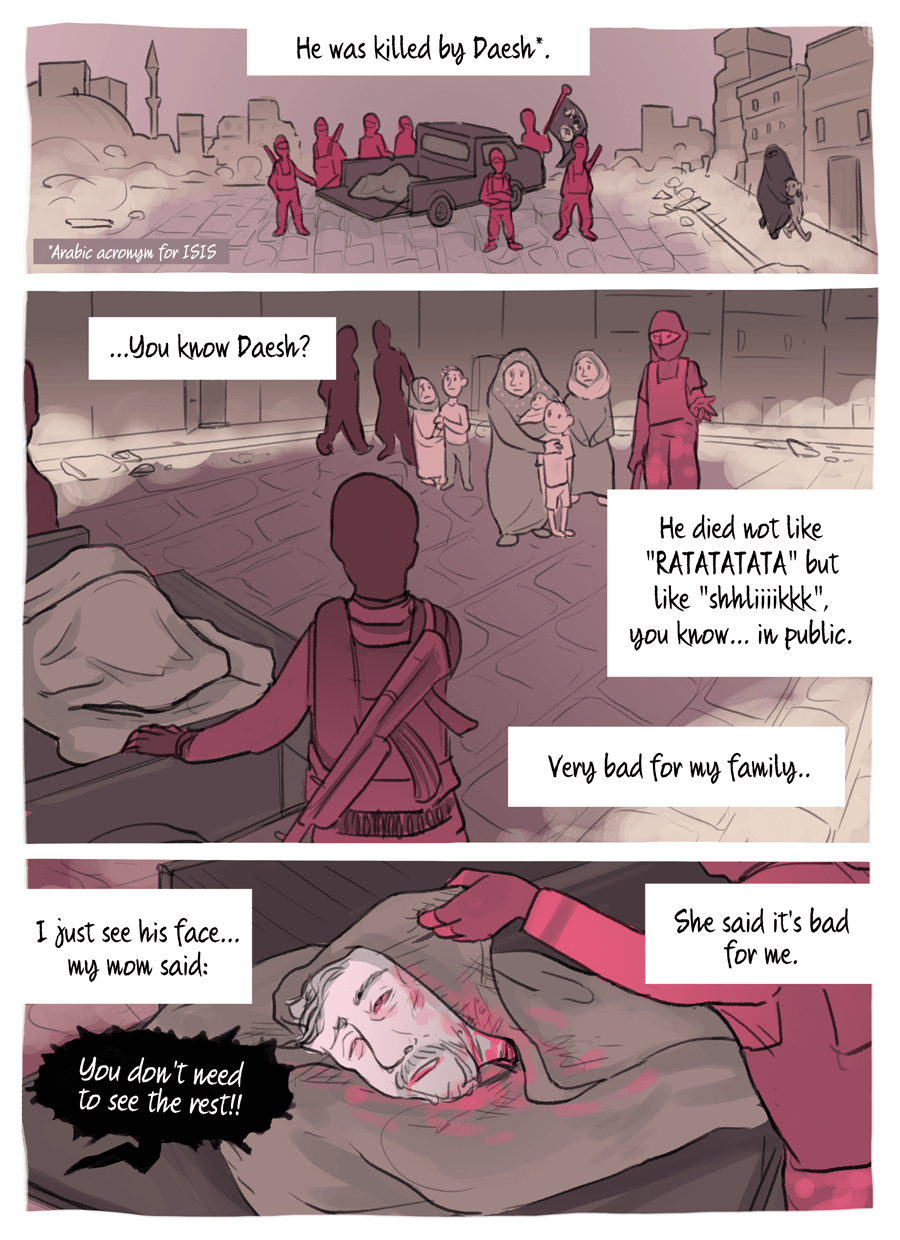 Pages and excerpts from "One day in Kara Tepe"

Sketches and notes from the camp reveal how drawing not only helped me to remember the surroundings, but also worked as a tool for gaining the trust of the people around us. Drawing is a very transparent and inviting activity in that everyone can see what I'm doing and that I'm doing nothing else -- unlike the black box of photography or video recordings. Sitting down and drawing a part of the camp for example, inhabitants who had been hesitant to talk to us before would get used to my presence and eventually be curious enough to introduce themselves or even assertively ask to be interviewed.

Sometimes, some of the many children in Kara Tepe would come up and ask to be drawn or to draw something themselves (see the two large flowers below). At other times, drawing helped to conduct a simple interview where the language barrier would have prevented any spoken conversation otherwise. 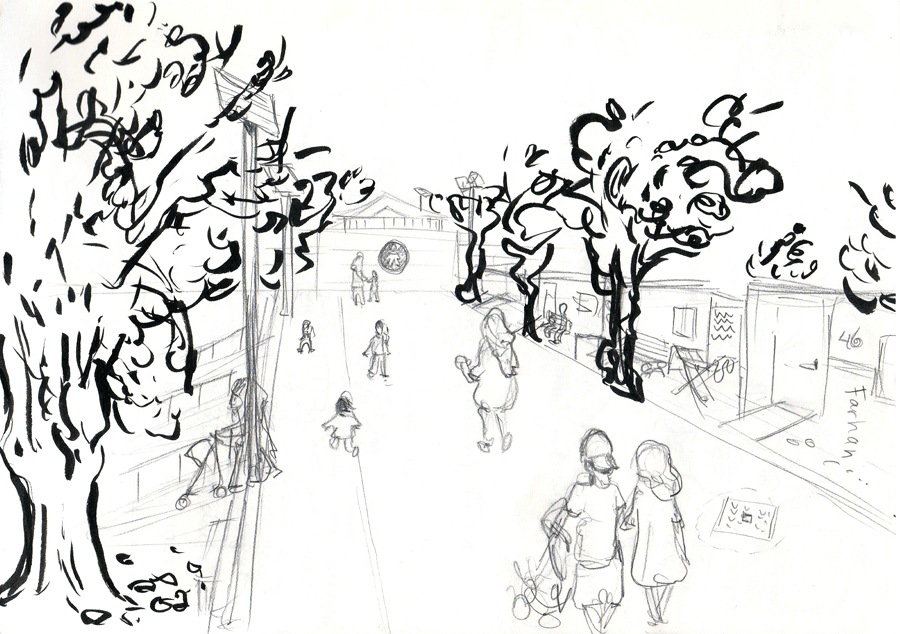 The "main street" inside Kara Tepe 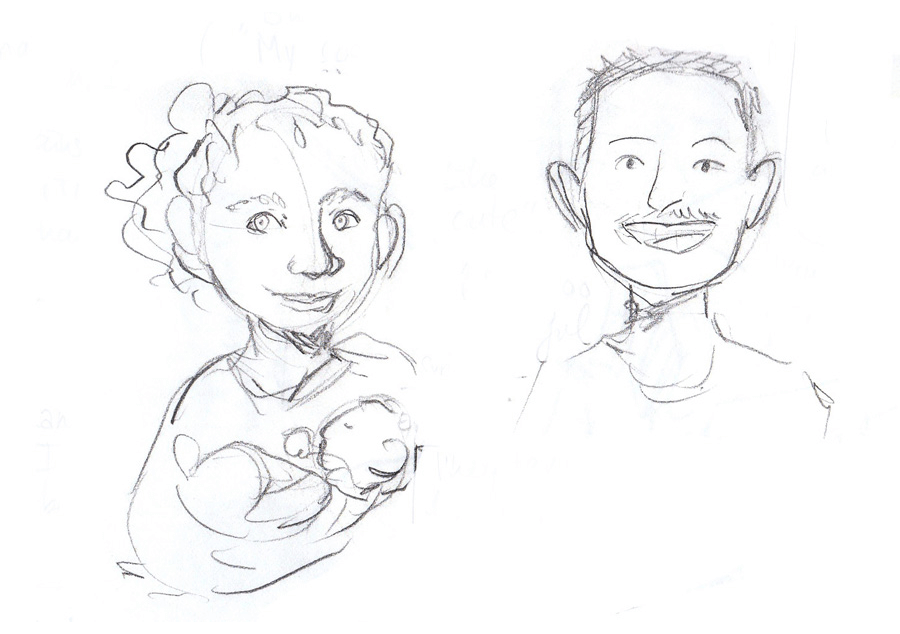 Some of the people I spoke with in the camp 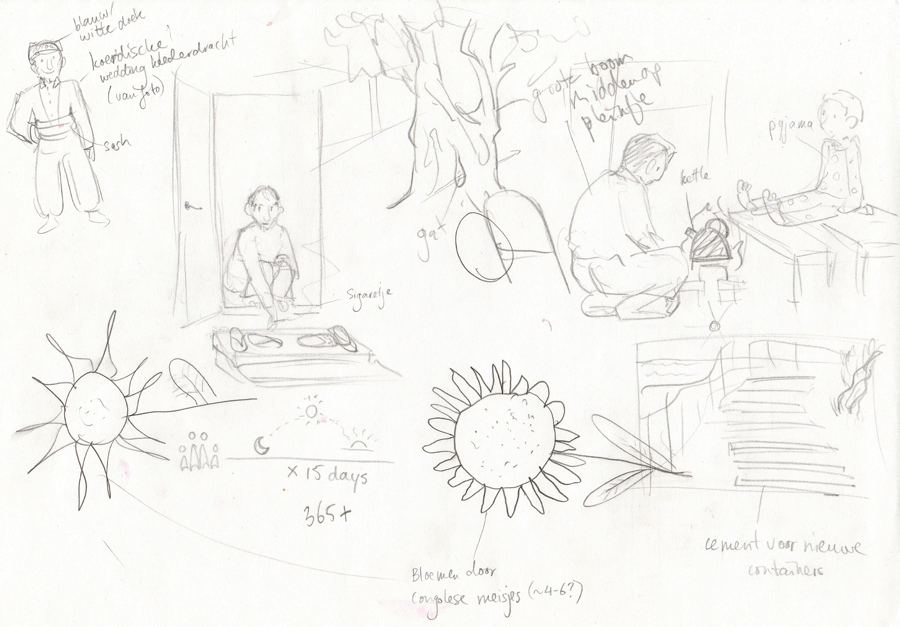 Notes with observations. The two flowers were drawn by two curious Congolese kids inside the camp

I had the opportunity to give a guest lecture at the University of Amsterdam about these aspects of graphic journalism, and what other potential I see for this medium. Thanks to Sarah Beeks and her students for the invitation and interest.

The comics by Aimée and myself were part of an exposition on visualisations of the refugee crisis at the Stripmuseum (comic museum) Groningen towards the end of 2018. 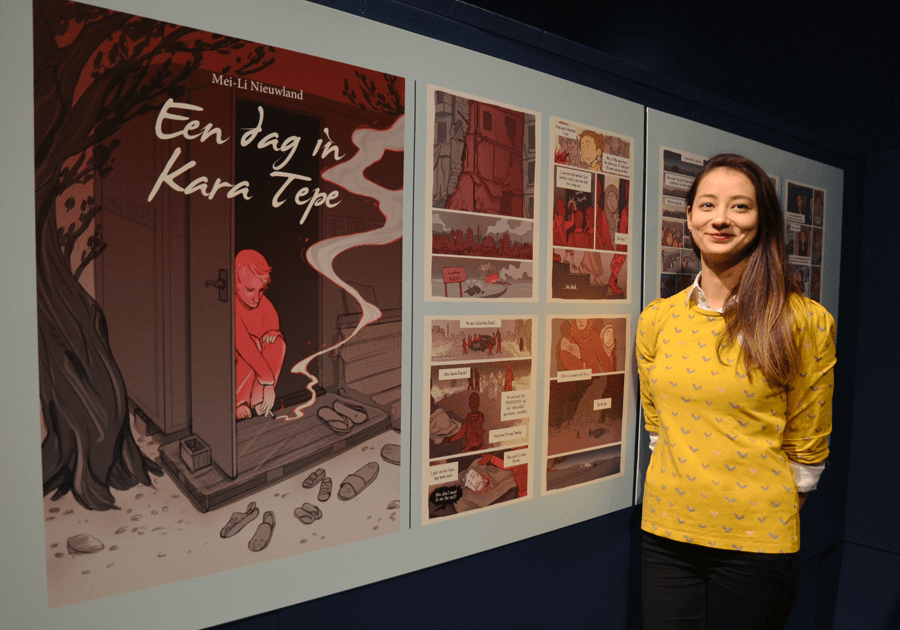 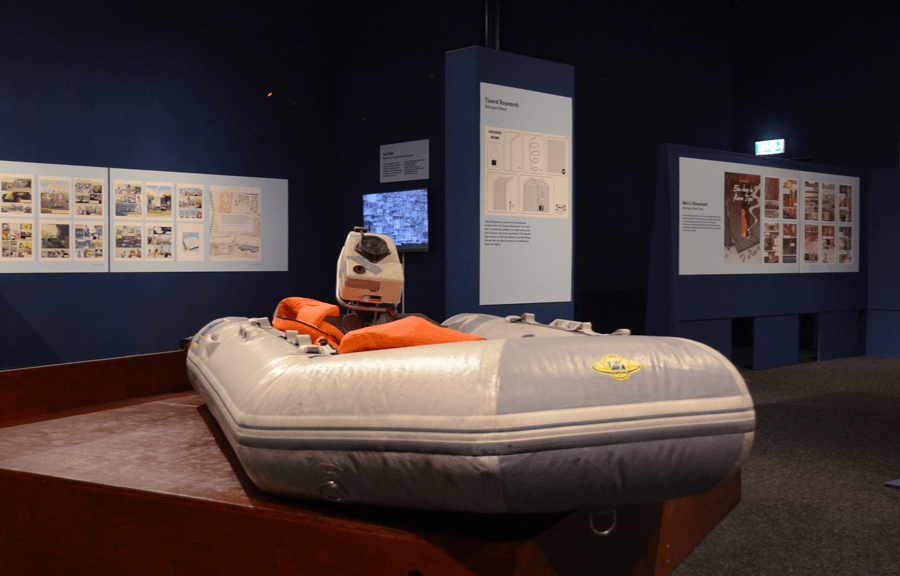 This project was funded with the help of the Fonds Bijzondere Journalistieke Projecten, the Lira Startsubsidie for young journalists, and the Pascal Decroos Fund for Investigative Journalism.

A huge thanks to Aimée de Jongh for the brave initiative and amazing organization, and to the volunteers of Dutch NGO Because We Carry, for allowing us to make this report and for working day and night to make life in Kara Tepe a little bit more beautiful.